Let me start out by saying I am NOT a fan of leftovers. AT ALL. However, somehow we always end up with mounds of them in our refrigerator (thanks, Mom). In the past, we’ve been really bad with not making the most of our leftovers, so this year I decided to change that up. By adding simple ingredients, leftovers can save a ton of time and money and not taste half bad.

My mom made some STELLAR stuffing this year, full of sausage and cranberries. Per my request, I was sent home with her stuffing leftovers after Thanksgiving; however,  I wasn’t all too enthused to eat it popped into the microwave on its own. So I stopped and picked up a few acorn squash (I had never cooked with them before!) and some sage, not exactly sure what I’d do with them. First thought: stuff the squash, of course, and what better to stuff it with then….(you guessed it) STUFFING! The rest of the ingredients were already in my pantry, so this made for a very cheap and tasty winter meal.

Aren’t they so pretty?! 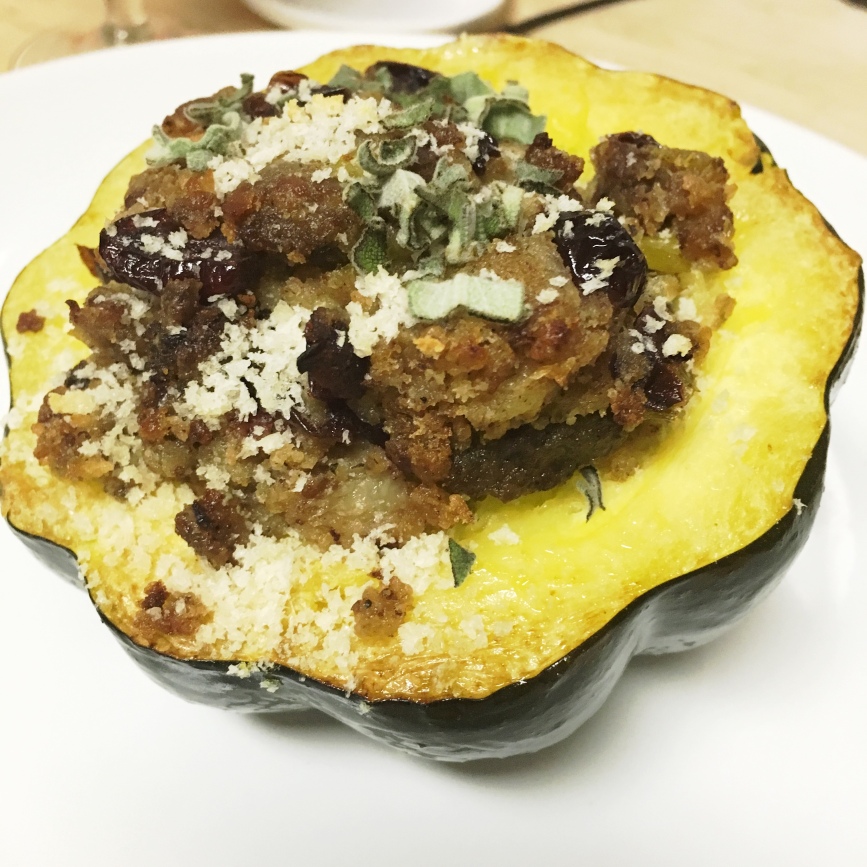 If you don’t have stuffing leftovers just lying around, and you think this recipe sounds way too delicious to pass up, just go ahead and make a batch of stuffing (I included my mom’s recipe below) and use it throughout the week for other meals!

Here ya go, two recipes for the price of one!

Directions
1. Preheat the oven to 350 degrees F.
2. Cut the acorn squash in half, scoop out the seeds. Tip: Cut the tip of the top portion so that the squash sits easily on both sides (you will be cooking face up and face down).
3. Add the olive oil in the middle of the open halves and use a pastry brush to coat the edges.
4. Place the squash halves open side down on a baking sheet and bake for 15-20 minutes.
5. Flip the squash over and run a fork through the middle making strings. Add a little butter and top with leftover stuffing (can be right out of the fridge).
6. Bake for another 20 minutes. Remove from the oven and spray with cooking spray and top each half with panko breadcrumbs. Bake for another 15 minutes or until squash is tender and the stuffing is hot.
7. When done, top with sage and serve.

**Again, I used leftover stuffing for this recipe. If you don’t have a favorite stuffing recipe, I’ve included the very tasty Cranberry Sausage Stuffing recipe that I used below**

Directions
1. Preheat oven to 325 degrees F.
2. In large skillet, crumble and cook sausage until browned. Remove from pan.
3. In the same skillet, melt the butter over medium heat and saute the celery and onion until soft, about 5 minutes.
4. In a large bowl combine celery, onion, sausage, stuffing mix, cranberries, and salt. Add broth and stir until well mixed. Bake in casserole dish, covered for 1 hour at 325 degrees F or until hot.
5. Refrigerate up to 4 days in air tight container until ready to use.